Best Places to Live in Canada as a Student 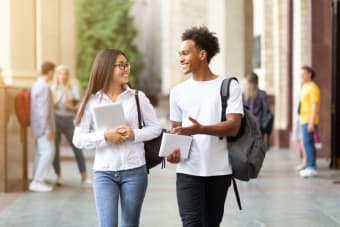 If you are planning to move to this country to work and study, you're probably wondering about the best and cheapest places to live in Canada for international students. Our Ottawa and Orleans immigration physicians list 10 cities in this article, with factors such as schools, culture and affordability to consider.

What are the best places to live in Canada for students?

No matter where you choose to live, study and work in Canada, you can be sure you'll find colleges and universities that offer internationally recognized degrees with affordable tuitions and an education you can be proud of.

This country is also ranked among the best for quality of life. International students also often find it easier to obtain permanent residency after completing their education. In addition, our multiculturalism, diverse population, exciting economic activities and inclusive approach to welcoming international students is also one of the reasons young people flock here.

The cost of living in Canada is also affordable for many international students, though it requires significant planning and commitment to budgeting and finances before you arrive. Consider rent, food, transportation costs, health insurance, fun and entertainment and more.

Costs will vary widely depending on your location (large cities are more expensive than suburbs) and your living accommodations - a dorm room on-campus, shared apartment or townhouse.

In this article, we'll discuss cost of living briefly for each city named. Cost of living data cited in this post can be found on Numbeo, the world's largest crowd-sourced global cost-of-living database.

As Canada's cultural capital, Toronto is one of Canada's most popular places to study. The city boasts many international festivals, a vibrant food and arts scene, historical sites, shopping, entertainment and more.

Its citizens speak 140 languages, and it's the most populous city in Canada.The United Kingdom, China, India and Ireland all form a significant cultural component of the metropolis.

While you'll find the cost of living is high due to a shortage of affordable housing, it's possible to find a well-paying job since graduate students are in demand. In addition, public transportation includes buses, subways and street cars.

There are also 700 undergraduate and 200 graduate programs to choose from at renowned educational institutions. Explore in-demand careers including registered nurse, transport driver, teacher and more when you graduate school.

With 15 prestigious universities more than 100 calling Montréal home, this city is full of prestigious schools, including McGill University. It is also one of the most highly funded research hubs in Canada, thanks to its large pool of university researchers.

A mecca for comedians and entertainers, this multilingual and multicultural destination for students is also one of the most well-employed cities.

Greater Montreal has a population of 4.3 million and boasts a mosaic of diverse neighbourhoods, from historic Old Montreal to Little Italy. You'll also have quick access to several major Canadian and U.S. cities, including Ottawa, Toronto, New York City, Boston and Washington, D.C.

A single person's estimated monthly costs are $1,147.38 CDN, without rent. Find more information about cost of living in Montreal on Numbeo.

Ontario's neighbouring province is well-known for its primarily French-speaking population. In fact, most university courses are delivered in French here.

Speaking of schools, in Quebec is home to many universities, including Laval University (Université Laval) and the University of Quebec (Université du Québec). the National Institute of Scientific Research and the National School of Public Administration.

Quebec City is one of the most affordable large cities in Canada. A single person's estimated monthly living costs are $1,090.92 CDN, excluding rent. Find more information about cost of living in Quebec City on Numbeo.

Ottawa's low cost of living, thriving economy, diverse population and natural beauty make it one of the most student-friendly places in the world.

The low crime rate and high average income rate, with a range of employment opportunities for immigrants, make it an attractive city to young people. It's also easy to get around — use the rail transit system or high-frequency, rapid bus transit to find your way around Canada's capital.

As a bonus to living in this small, multicultural destination, you might learn a few new languages while you're here. German, Chinese, Arabic, Italian and Spanish are among the most common languages people speak here.

Schools in Ottawa include Carleton University and the University of Ottawa, and you'll also find the country's largest technology innovation park, Kanata North.

And of course, try ice skating on the Rideau Canal in the winter for a unique Canadian experience.

One of the country's largest tech hubs, Vancouver is a popular destination for those seeking careers in biotechnology, software, programming and video game development.

Top universities in the city include the Universitiy of British Columbia, University Canada West and Vancouver Island University.

The city has also become a film production mecca, with many movies and TV series being filmed here. Fun fact: Vancouver, Toronto and Montreal often stand in for some of America's largest cities. Career-wise, you'll find loads of opportunities in broadcasting and film production and animation here.

While Vancouver is a beautiful city where opportunities abound, cost of living is high - more expensive than Toronto. A single person's estimated monthly costs are $1,327.50 CDN, excluding rent. Find more information about cost of living in Vancouver on Numbeo.

Engineering students often flock to Calgary for their engineering programs due to the city's proximity to the oil and gas industry.

Local colleges and universities include Bow Valley College, the Southern Alberta Institute of Technology (SAIT), Mount Royal University and the University of Calgary.

Thanks to Alberta's low provincial tax rates, the cost of living in Calgary is affordable. Keep in mind that tuition rates in Calgary are comparable to those in Edmonton, but a slightly higher cost of living means it is somewhat pricier.

A single person's estimated monthly costs are $1,299.33 CDN, without rent. Find more information about cost of living in Calgary on Numbeo.

There are many highly esteemed educational institutions in Canada's northernmost metropolis. Combined with relatively low living costs, these factors bring a crowd of international students in annually.

In Edmonton, you'll find the Northern Alberta Institute of Technology (NAIT), MacEwan University and the University of Alberta.

The city's green space and walkability present many opportunities for extracurricular activities, as does the vibrant nightlife.

With its research and development facilities, infrastructure, well-educated workforce and natural resources, Saskatoon draws many international students every year.

Called the "Paris of the Prairies", Saskatoon offers an array of bars, restaurants, breweries and attractions. Visit the Riverside District and Meewasin Trail, which winds around both sides of the South Saskatchewan River.

Take in some nature and wildlife at Beaver Creek Conservation Area, peruse the crafts, food and goods on offer at the Saskatoon Farmers Market or indulge in a delicious crafted drink at one of the many breweries, distilleries or cideries.

The University of Saskatchewan is one of the province's most prestigious universities and offers a range of programs, bachelor degrees, masters programs and doctorate degrees.

The city also offers a relatively low cost of living compared to other major cities in Canada. A single person's estimated monthly costs are $1,191.89 CDN, excluding rent. Find more information about cost of living in Saskatoon on Numbeo.

Commonly referred to as KW, Kitchener combines big-city allure with small-town charm and is about one hour's drive from London, Brampton, Hamilton and Toronto.

Another city with a bustling technology sector, Kitchener is one of the fastest growing regions in Ontario with a population of 623,000 that's expected to reach 729,000 by 2031.

The area has two universities and one technical college: University of Waterloo,  Wilfrid Laurier University and Conestoga College. Housing here is less expensive compared to several other cities in Ontario and the average salary is comparable to what you'd find in big cities.

Oktoberfest is the top attraction here, as it's the second-largest Oktoberfest in the world. You'll also find the Grand River, many parks and trails and a diverse downtown.

A single person's estimated monthly costs here are $1,191.57 CDN without rent. Find more information about cost of living in Kitchener on Numbeo.

More than 740,000 people call culturally diverse city home. As the capital of the province and its largest city, Winnipeg boasts a burgeoning IT sector. Many love this small city that feels like a big town of 810,000 residents.

Winnipeg is one of the cheapest places to live in Canada for students, with tuition, rental and housing, electricity and car insurance rates ranking among the lowest in Canada. Unemployment rates in the province are also among the country's lowest.

Many international students find their way here thanks to incentives offered by Manitoba's provincial government, including the Provincial Nominee Program that assists people with skills they'll need to enter the local labour market.

Graduates with post-degree diplomas from designated learning institutions will also be eligible for a post-graduation work permit.

Take a break from studying and working by enjoying the city's rich cultural heritage and festivals, including the francophone Festival du Voygeur and the Winnipeg Folk Festival.

A single person's estimated monthly costs are $1,181.94 without rent. Find more information about cost of living in Kitchener on Numbeo.

What is the cheapest place to live in Canada for students?

Use your favourite search engine to research "cheap places to live in Canada for international students" and you'll find Montréal, Quebec and surrounding communities on many of those lists, including this one from UpGrad Abroad. Other top cheapest cities in the country are in Alberta, Ontario, New Brunswick and British Columbia.

When budgeting to live in Canada as a student, use updated, reliable sources to search for information about cost of living in your chosen city.

Keep in mind that Citizenship and Immigration Canada (CIC) will require proof of a minimum bank balance to provide you with a Canadian student visa.

The immigration officer will likely follow the cost of living estimate from your college. If your college or school doesn't provide one, you'll be required to show evidence of $10,000 for 12 months living expenses in Canada as a student. An additional $4,000 is required for a spouse and another $3,000 per dependent.

The amount above includes accommodation, food, medical insurance, clothing, books and transportation. Canadian university fees and other fees are not included in the amount. The cost for a student visa is currently roughly about $150 CDN.

Are you interested in learning more about applying for permanent residence in Canada, the doctors at Immigration Physician Ottawa can help. We can provide guidance on the application process and provide health exams and certifications as needed. Contact us today to book an appointment.