Things You Should Know Before You Move to Canada 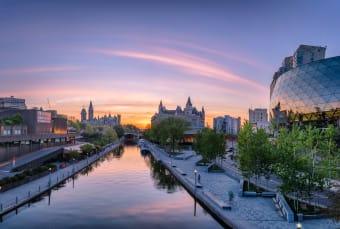 So, you have gone through the immigration process and are ready to become a permanent resident of Canada. But what should you expect from the country that will be your new home? Here, our Ottawa and Orleans immigration doctors explain some of things to keep in mind when preparing for your new life in Canada.

Customs, practices and expectations of behaviour and day-to-day knowledge change from place to place. You surely know that things will be somewhat different in Canada than in the place you currently or until recently, resided. You may even have some idea of how Canada will be different than where you are coming from.

However, the last thing you likely want is to come to a new place unprepared, even if you already know a bit. Here, our Ottawa and Orleans doctors explain some of the things you should know before moving to Canada to help you prepare (and help you feel like you fit in when you arrive).

You may know that Canada is large, but it may be difficult to wrap your head around exactly how big it is. Canada is the second-largest country in the world (after Russia). The United Kingdom can fit comfortably inside Canada over 40 times and the eastern-most point of Canada is closer to Europe (across the Atlantic Ocean) than it is to the Western Coast of Canada.

Because of Canada's size, it also hosts a wide variety of climates depending on where in the country you are. Canada is known for its harsh winters and that is true in much of the country. However, if you are planning to move to British Columbia or Southern Ontario, you needn't prepare for Arctic levels of cold.

In fact, in Canada's West Coast (including the city of Vancouver), the winters don't get below 0 degrees Celsius and in Southern Ontario (like the city of Windsor), the temperature falls to only about -6 degrees celsius on average in the winters. Bundle up, but make sure you do some research on what winters and summer are like where you will be living!

Canada is a hugely diverse country! Over 40 members of the national parliament were born in a different country and over 1 in 5 Canadians were born abroad. In urban areas like Montreal, Vancouver, Edmonton, Ottawa and Toronto, there are huge numbers of diverse ethnic and cultural communities.

Canada doesn't ask you to abandon your beliefs, your culture and your heritage when you move here. But, it is important that you be aware that an open mind is key. The diversity that is key to Canada's identity can mane you may encounter people. practices or beliefs that you don't appreciate or that run counter to your previous experiences. But as long as you are ready to accept others, they will be sure to accept you too.

Depending on where you are looking to live and work in Canada, the cost of living may vary quite widely. Urban centers like Toronto and Vancouver, while diverse and full of opportunities for work, have rapidly increasing costs of living and many people travel an hour or more from outside of the city every day to work.

In other urban centers like Ottawa, Calgary, Halifax or Montreal, the cost of living is a bit less expensive. Sometimes, this means that there aren't quite as many opportunities available in your specialty. But often, this is not an issue. Outside of urban centers, job opportunities are less readily available, but some of the costs of living (especially housing) are far less than that in the city.

You may very well know that Canada has two official languages, English and French. You may even speak both of them or be looking to develop one or the other while you live in Canada. Like the climate, the language you will need to call on frequently will depend on where you live.

In Quebec, New Brunswick, the city of Ottawa and certain regions of other provinces, French is a common-used (or even primarily-used) language. In much of Quebec outside of certain urban areas, you will likely get strange looks if you try to speak in English to people.

Elsewhere, English is the default language. Many people outside of the above regions and cities will know very little (or even no) French and may give you the same kind of look if you try to communicate with them using it.

However, knowing both languages is a great benefit to an individual. Some jobs require working knowledge of both languages, and those that don't will often value someone that can work in both English and French, since there will generally come a time when those skills will need to be called-upon in a Canadian company.

Are you moving to Canada soon or have recently moved to Canada and are seeking permanent residency? At Immigration Physician Ottawa, we are able to provide medical examinations and certifications to help you with the application process for residency and advice about medical treatment available to you in this country. Contact us today to learn more.